Johnny X: A New Beginning – It’s time for the Earth Day Carnival and the Johnny Stopping Evil Force 5 (with Zizrar replacing the Beekeeper) returns and obtains the same mutant powers as Johnny X, and Super Dukey. Johnny X: The Final Ending – Following the events right after “JX6-a: A New Beginning” Dark Vegan returns to destroy the Earth with an upgraded armada. Dark Vegan, with his upgrade armada, is cutting up the Earth’s trees, taking off the oxygen and sucking up the Earth’s water. Johnny, Dukey, and the Johnny Stopping Evil Force 5 team up to stop Dark Vegan and return the Earth’s resources. 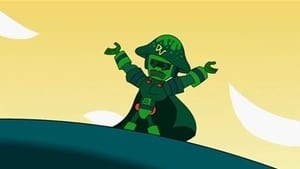