Misuzu’s curse is getting more serious. Soon, she has forgotten who Haruko is and begins to act strangely, playing cards by herself and not wanting to go outdoors. Haruko is depressed, but tries hard to restore the memories Misuzu lost. Soon, however, Misuzu’s birth father shows up, and tries to claim Misuzu back from Haruko, deciding to let Misuzu decide who she wants to live with. Haruko, desperate because of Misuzu’s memory loss, begs him to let her have Misuzu for 3 more days, to which he agrees. 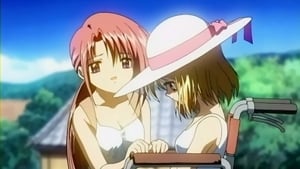